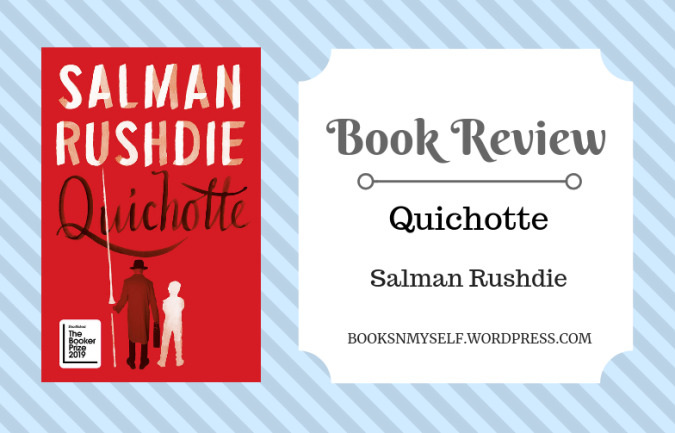 Salman Rushdie’s Quichotte is an account of a postmodern man standing at the brink of the collapse of civilization staring at his own reflection. The man is the author Sam DuChamp and his reflection is the character that he creates, Quichotte. So there is a story within the story. The primary narrative is that of Quichotte and his quest to win the love of a TV star. Travelling across America, Quichotte is accompanied by his imaginary son Sancho.

Through his characters, the author DuChamp has a face-off with the challenges of his own life. As Quichotte moves on in his quest, the boundaries between fact and fiction blur and the author’s own life is laid bare so that what Rushdie has presented here becomes not just a mere novel but also an account of the very process of writing this (meta-fictional) novel. In this sense, it does talk about the subjectivity of the writer and the way writers seek substitute gratification in their writing.

Quichotte is primarily a postmodern novel. There are a lot many (I’d rather say way too many) references to the Pop culture. As characteristic of the postmodern world, there is a blend of both high as well as low culture. Of course some of these references were lost on me. As a matter of fact, I haven’t read Cervantes’s Don Quixote. But that didn’t hamper my reading experience in any way.

The theme of the loss of the real, that is the inability to differentiate between the real and the ‘real’ is predominant in the first half of the book. In the later part, Rushdie is more obsessed with the theme of death and the end of the world. Among others the themes of racism, cyber crime and drug abuse form an important part of the narrative. The very opening line of the novel establishes its diasporic nature. As such the ideas of alienation and identity crisis come as no surprise for the readers. Sancho, the imaginary son of Quichotte is a prototype of the existential human being.

Rushdie’s prose is a delight to read. He writes long sentences often spanning over a paragraph. At certain parts, Rushdie plays with language (Bambaii, for instance) and also presents a GLocal (Global+Local) version of English. Rushdie has also employed the famous Whitmanian catalogue technique so that often his sentences are long catalogues of several things. But these catalogues are not always fun to read. Further at times, ideas are force fed to the readers and did not seem to be congruent with the plot.

Despite all the intellectual stuff, there are also basic human emotions as explored through the background story of several characters, particularly the Brother-Sister duo. Quichotte’s quest through the seven valleys is actually a quest towards redemption, which ends with the merging of the self into the Self (the Hindu idea of Aatma and Parmatma). So in the final analysis Quichotte does come across as a alienated man seeking redemption in this hopeless world.

I enjoyed this book for the greater part and I enjoyed the ending as well. But the plot has been certainly compromised. I’ve read Don DeLillo’s White Noise, which according to me is a masterpiece on the postmodern world. But that doesn’t stop me from recommending this book. Read it for what it is.

He talked about wanting to take on the destructive, mind-numbing junk culture of his time just as Cervantes had gone to war with the junk culture of his own age. He said he was trying to write about impossible, obsessional love, father-son relationships, sibling quarrels, and yes, unforgivable things; about Indian immigrants, racism towards them, crooks fictional and ‘real’ realities, the death of the author, the end of the world.

What do you think about this book? Which is your favourite book by Rushdie? And what;s your take on magical realism? Do share your thoughts. Thanks.

*I was sent a copy by the Publisher, in exchange for a review. Views expressed are entirely personal and unbiased.*

A lover of books... Presently pursuing Masters in English Literature...

I’m not accepting any review copies till April 2018.

I am currently reading: